So far in Ernest Barnes’ blog posts, we’ve looked at Brunelleschi’s Dome in Florence and Keble College in Oxford, for a range of incredible architectural and brickwork examples. This month will feature Grundtvig’s Church, located in Copenhagen, Denmark. Architect Peder Vilhelm Jenson Klint designed the church as part of a national competition to build a memorial for N.F.S Grundtvig, a famous Danish philosopher and hymn composer. National monuments like Grundtvig’s Church reveal the architectural wonders that architects and heritage building contractors can create and maintain. 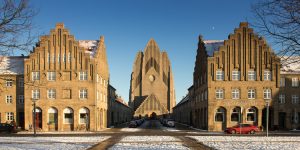 Grundtvig’s Church was built from an estimated five million bricks between 1921 and 1940 in an Expressionist style. It is believed that the project only required the work of nine bricklayers, laying an average of 150 bricks per day. The unique brickwork, consisting of yellow bricks in a poetic composition, has made the church a famous example of compelling brickwork design and maintenance for heritage building contractors; the interior of which has been polished and the colour carefully preserved.

The foundations of the church were laid on Grundtvig’s birthday, after World War I had ended. The first part of the church to be built was its bell tower and western façade, which is 49 metres tall. This aspect of the building is perhaps the most iconic, with the brickwork creating an architectural appearance that is reminiscent of a church organ. Whilst Jenson-Klint died before completing his architectural memorial, his son completed the church, largely sticking to his father’s plans.

It is thought to be one of the only Expressionist churches in the world, showcasing the movement’s ability to create unique buildings motivated by strong emotion. The Expressionist movement developed throughout Europe during World War I when social and political turmoil was represented architecturally, particularly in Germany, Austria, and Denmark. Peder Vilhelm Jenson Klint adopted the Gothic style, which is often used in Expressionist buildings, and combined it with a large-scale version of a traditional Danish church with medieval roots. 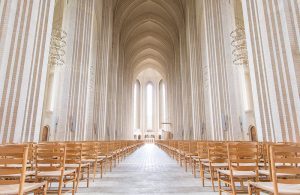 Grundtvig’s Church is an amazing example of intricate brickwork and has won many awards and inspired architects over time, with The Architect’s Journal naming it the best brick building of its time, in the world. Last year it was also featured in a book, 50 Architects 50 Buildings, which reveals the most influential buildings globally. Michael Squire, a London-based architect, selected Grundtvig’s Church for the book, commenting “the exterior of the church is powerful and expressive. Its shapes are drawn from organic crystalline forms and contemporary futurist images. The effect is calm and restrained, yet enormously powerful.”

Being a remarkable example of an Expressionist building, Grundtvig’s Church captures nationwide respect for the Danish thinker, whilst showcasing the best in innovative design and traditional Danish culture. It’s easy to see why contemporary architects and heritage building contractors continue to be inspired by Grundtvig’s Church and seek to preserve it for the future.